The amazing characteristics of the camels

Domesticated thousands of years ago by frankincense traders, who trained the gangly cud-chewer to make the long and arduous journey from southern Arabia to the northern regions of the Middle East, the camel went on to become the desert dwellers primary source of transport, shade, milk, meat, wool  and hides.

In technologically-advanced Saudi Arabia, even the Bedouin are not as dependent on  the camel as they once were. These days, camels are valued more as thoroughbred racing animals and sentimental images of the past than as the mainstay of  transportation. But in many parts of Africa and Asia today, camels still pull ploughs, turn waterwheels and transport people and goods to market along desert routes unpassable by wheeled vehicles.

To appreciate the unique contribution that the Arabian camel has made to the people and history of desert lands, here’s a comprehensive fact-pack on the special characteristics, body structure and behaviour patterns of this amazing creature.

Behaviour
Unpredictable at best. Camels have the re putation of being  bad-tempered and obstinate creatures who spit and kick. In reality, they tend to  be good-tempered, patient and intelligent. The moaning and bawling sound they make when they’re loaded up and have to rise to their feet is like the grunting  and heavy breathing of a weight-lifter in action, not a sign of displeasure at having to do some work.

Body temperature
Camels do not pant,  and they perspire very little. Humans start to sweat when the outside temperature rises above the normal body temperature of 37Âº C, but the camel has a unique body thermostat. lt. can raise its body temperature tolerance level as  much as 6Âº C before perspiring, thereby conserving body fluids and avoiding  unnecessary water loss. No other mammal can do this. Because the camel’s body temperature is often lower than air temperature, a group of resting camels will even avoid excessive heat by pressing against each other.

Colour
Camels come in every shade of brown, from cream to almost  black.

Ears
A camel’s ears are small, but its hearing is acute – even if, like the donkey or basset hound, it chooses to pay no attention when given a command!  A camel’s ears are lined with fur to filter out sand and dust blowing into the  ear canal. 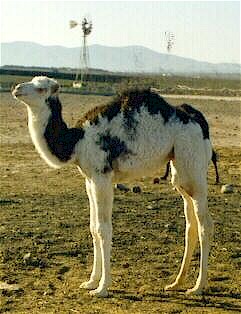 A camel’s eyes are large, with a soft, doe-like  expression. They are protected by a double row of long curly eyelashes that also help keep out sand and dust, while thick bushy eyebrows shield the eyes from the desert sun.

Feet
Camels have broad, flat, leathery pads with two toes on each foot.  When the camel places its foot on the ground the pads spread, preventing the foot from sinking into the sand. When walking, the camel moves both feet on one  side of its body, then both feet on the other. This gait suggests the rolling  motion of a boat, explaining the camel’s ‘ship of the desert’ nickname.

Food
A  camel can go 5-7 days with little or no food and water, and can lose a quarter of its body weight without impairing its normal functions. These days, camels rely on man for their preferred food of dates, grass and grains such as wheat  and oats, but a working camel travelling across an area where food is scarce can  easily survive on thomy scrub or whatever it can find – bones, seeds, dried leaves, or even its owner’s tent!

Hair
All camels moult in spring and have grown a new coat by autumn. Camel hair is sought after world-wide for high-quality coats, garments and artists’ brushes, as well as being used to make traditional Bedouin rugs and tents. A camel can shed as much as 2.25 kilos/5lbs  of hair at each moult. 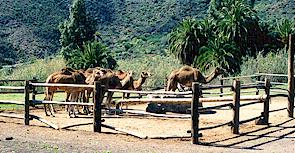 History
Scientists believe that ancestors of the modern camel lived in North America at least 40 million years ago, wandering across the Alaskan ‘land bridge’ to Asia and eventually Africa. In Asia, two groups separated to become the two chief types of camel known today: the dromedary and the two-humped,  shorter-legged Bactrian camel.

Hump
Contrary to popular belief, a  camel does not store water in its hump. It is in fact a mound of fatty tissue from which the animal draws energy when food is hard to find. When a camel uses  its hump fat for sustenance, the mound becomes flabby and shrinks. If a camel draws too much fat, the small remaining lump will flop from it’s upright position and hang down the camel’s side. Food and a few days’ rest will return the hump to its normal firm condition.

Legs
A camel’s long, thin legs have powerful muscles which allow the animal to carry heavy loads over long distances. A camel can carry as much as 450kg/990lbs, but a usual and more comfortable cargo weight is 150kgs/330lbs. It is usual for a camel to work as a  beast of burden for only six to eight months of the year; the remainder of the time it needs to rest and recuperate. 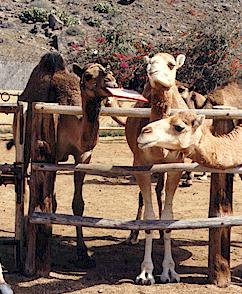 Life span
After a gestation periods  of 13 months, a camel cow usually bears a single calf, and occasionally twins. The calves walk within hours of birth, but remain close to their mothers until they reach maturity at five years of age. The normal life span of a camel is 40  years, although a working camel retires from active duty at 25.

Meat
The  best camel meat comes from young male camels. It is regarded as a delicacy in  the Arabian diet, and is gaining popularity in arid lands where It is difficult to herd sheep, cattle and goats. Although It makes for tough chewing, the taste  is not unlike beef.

Milk
Camel’s milk is much more  nutritious than that from a cow. It is lower in fat and lactose, and higher in  potassium, iron and Vitamin C. It is normally drunk fresh, and the warm frothy liquid, heavy and sweet, is usually an acquired taste for the Western palate.  Most Saudi Arabian camels are females reared for their milk in dairy  herds.

Mouth
The camel has a large mouth, with 34 sharp teeth. They enable the  animal to eat rough thorny bushes without damaging the lining of its mouth, and  can be used as biting weapons against predators if need be. A camel gulps down  its food without chewing it first, later regurgitating the undigested food and  chewing it in cud form.

Nose
A camel’s nasal passages are protected by large muscular nostrils that can be opened and closed at will. When a camel twitches its nose, it is cooling the incoming air and condensing moisture from its outgoing breath. 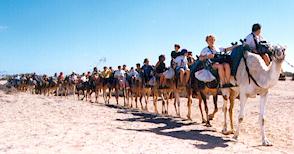 Speed
Normal ‘amble speed’ for a walking camel is 5kph/3mph; a working camel will typically cover 40km/25 miles a day. Racing  camels can reach 20kph/12mph at the gallop.

Water
Camels need very little water  if their regular diet contains good, moisture-rich pasture. Although camels can  withstand severe dehydration, a large animal can drink as much as 100 litres/21 gallons in ten minutes. Such an amount would kill another mammal, but the camel’s unique metabolism enables the animal to store the water in its bloodstream.

Weight
A fully-grown camel can weigh  up to 700kg/ 1542lbs.
The camel’s capabilities have been well documented over  the centuries, and its niche in the history of mankind is assured. But as the camel’s contribution to desert life today dwindles as the mechanical age  continues to advance, It is up to us and to future generations to ensure that this wonderful animal retains a special place in the heart of tomorrow’s world